I had every intention of posting this before Halloween…obviously didn’t happen, but maybe it will help someone out next year.

My 7 year old knew he wanted to be Luigi for Halloween this year, the day after Halloween last year (haha)…I figured he would change his mind at some point, he didn’t. Which was fine with me because this was actually one of the easier costumes I’ve done.

I found this wonderful tutorial for making overalls over at Smashed Peas and Carrots. Go check it out. 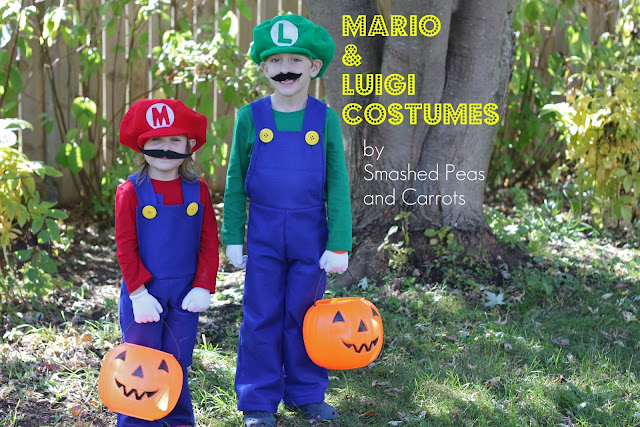 Aiden was insistent that he have a Yoshi to ride, and I had no idea really how to do that, until he and a friend were playing cowboys one day and riding around on a stick horse. Aha! A stick horse Yoshi! I figured with all the Mario fans there was bound to be a tutorial on how to do a plush Yoshi (why reinvent the wheel right?) I found this one by goomzilla on YouTube. I enlarged the needed items from the pattern he came up with (I’ve included a printable version of them below), and made only the head. Then I stuffed it, sewed the neck opening smaller and attached it with glue to a pole. Success! It’s not perfect, if you look at it close you can see some of my stitches, but it works.

The Details:
Mustaches
We tried out those stick on mustaches and they drove Aiden crazy, and then it occurred to me that face paint was perfect, but I didn’t want to buy a big thing of face paint when all I needed was a tiny bit of black for a couple of mustaches. So I made some of my own using info I found from various websites.

What you need:
A bit of lotion (depends on how much you are doing, the lotion is the base of the paint so however much you put in is about how much you end up with)
A small dab of black washable paint
A bit of corn starch

Mix them all up. I added corn starch until it was a bit more thick like a paste rather than lotion. It also helps it dry faster when you paint it on. A big plus when you are putting it on little ones. Aiden and Kian wore it a good 4 hours and it did not bother their skin at all.

I was lucky enough to find someone who let me borrow the hats and gloves their kids had used a few Halloweens ago. But these can also be found on Amazon.com

Put a red shirt under the overalls for Mario and a Green one for Luigi and your costume is complete.

Since this is a website about keeping costs down I thought I should share the costs of making these two costumes.

I already had the stick, stuffing for Yoshi and the buttons, along with the items to make the face paint. So I made two costumes for $7.67!